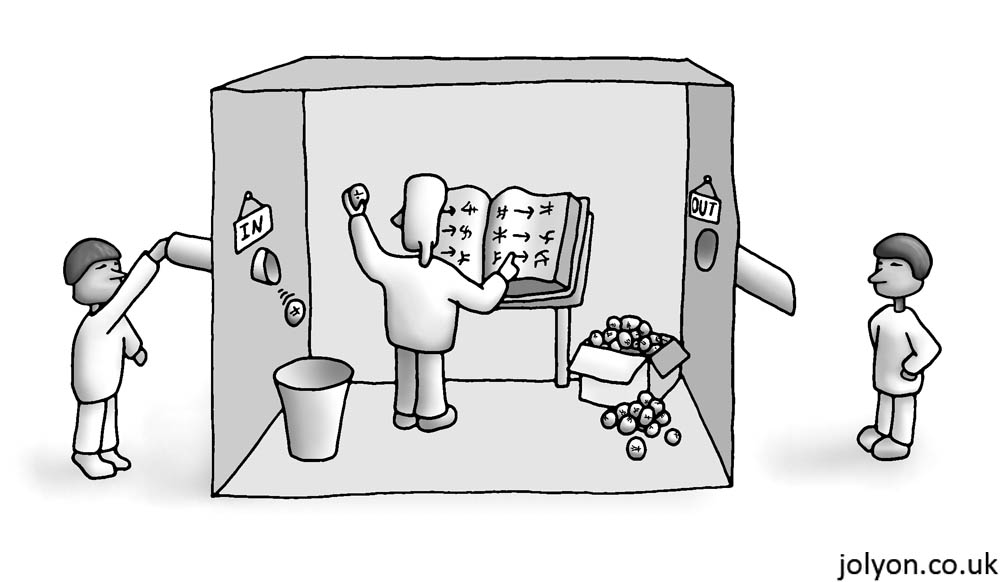 Let me confess, that writing this blog I feel like I would feed Chinese sentences to John Searle sitting in his Chinese room.

I know that I should not start a post by a sentence that refers to something that most readers know little about (it is interested to very narrow audience) and on the top of this make obscure thesis. But I can not resist fighting against KISS logic. I am sure that keep it simple makes people stupid.

So what has Chinese room and me feeding John Searle do with branding and physics from the title? (Yes, I intend to explain something, huraaah!)

It is now around 13 years that I’m trying to explain social phenomena through physics and some other “hard sciences” and at the same time to see how some concepts from human sciences (philosophy) could push “hard” scientist to understand wider what they are doing. I can see in the eyes and in the responses of those few that are willing to give response, that they understand my words, but that they do not understand meaning. Data is fed, but sense does not emerge. I can see that they take each domain as valid, but connections as irrelevant. So I know they get both my “chinese words” together with rules how to understand them, but they do not understand their meaning.

Strong artificial intelligence (AI) as explained by John Searle in Chinese room thought experiment is impossible in theory and in practice. One needs not to use Chinese example to support Searle’s thesis (Chinese language being marginal in 1980, but not any more!). Even for human intelligence, let us call it Strong HI, there are instances where no sense is derived from known syntax.

Communication is impossible if one is locked in Chinese room. Should John Searle come out of Chinese room, only then communication as sensemaking activity would be possible. Since we know that communication rest on meme exchange and meme participation, that means that chinese room allows words to enter, but not memes. Chinese room is meme and brand resistant. Introducing memes into long lasting discussion around Chinese room experiment solves apparent issue instantly.

Branding specialists, physicists, neuro scientists (and so on) are often locked in their separated Chinese rooms. They feed words together with rules one to another, but they will stay blind for anything outside their respective room, and thus numb in spreading their memes.

Until one realizes that we are living in one world that interconnects all physical genetic and memetic phenomena on same level, one is not only separated from meanings supposedly produced in other rooms, but even separated from your own sensemaking activity since, as proved so often in this blog, memes are interrelational and they exist only as interrelational, intersubjective.

So for instance only after physicists allows himself to exit the domain of data and enter into a domain of intersubjective sensemaking activity, he enters an option to be understood. With this shift he loses his divine (untouchable) status though, but he gains connectedness and understanding. So to communicate science means to open it to non-scientific discourse and challenge by definition. No challenge from outside, no communication.

I wish I had better understanding of laws of chemistry. Thermodynamics and complexity theory is unfortunately not enough.