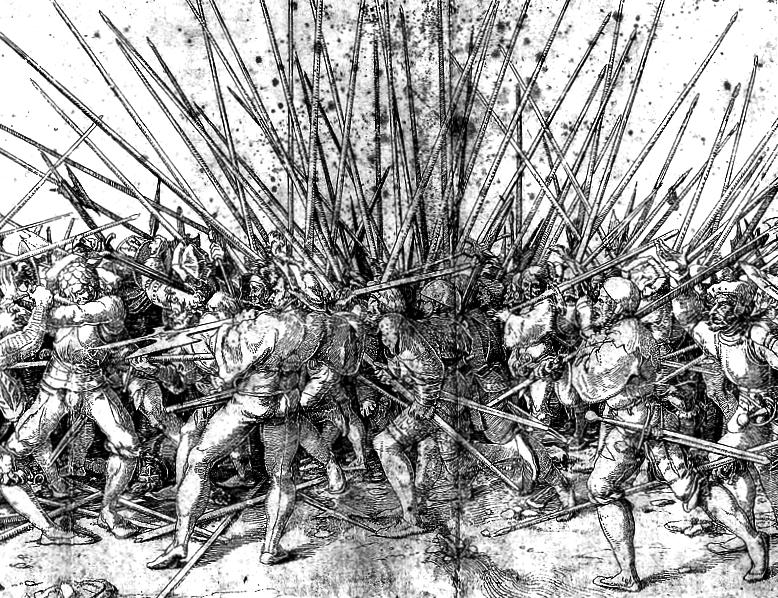 Politicians, poets, commoners … keep repeating that one of the main obstacles for humanity to achieve a goal (what goal? Prosperity, freedom? Peace?…?) is war. We have been taught that the earth would be a much better place to live if only our civilisation could avoid these stupid armed (and unarmed) battles between races, countries, cities, clans, families, individuals… that cause death, pain of relatives and (physical and psychological) wounds.

Unfortunately, this self-evident fact is as far from reality as almost all other self-evident facts. Not because it is impossible to achieve this goal due to the selfishness, stupidity, greed, … of humans, but because every complex system (including all Gaia ecosystems) cannot survive without occasional crashes, avalanches, riots and/or wars. If we understand war as a phase in the life cycle of the system where cells/agents/elements of that system destroy each other in a way that threatens the existence of the system, then war is an integral part (phase) of any system. As such, it is as necessary as any other metabolic function of a system. War is a prerequisite for life.

From the thermodynamic viewpoint

According to the second thermodynamic law, such a thought is undoubtedly a threat to the complacency that every complex system element (individual) strives for. And it is precisely this complacency that should be avoided in the search for the best evolutionarily stable strategy (ESS). It is ESS, what we all seek as living beings, not complacency. Nations, families, individuals, genes; each to their own. Should one confuse ESS with complacency (perfect equilibrium, peace), then one misses one’s survival kit and confuses living systems with physical thermodynamic systems.

The proof of the structural necessity of war for any (living) system is that the real surprise is the aforementioned self-evidence of a world reaching peaceful equilibrium in a bright future. We might associate this terrible illusion with all sorts of contemporary phobias (chemo, nucleo, algeo, bacterio…) based on the underlying hypothesis of complacency as the ultimate goal. It is then a hard lesson for all those who believe in complacency when confronted with threats for which they are not prepared (dirt, bacteria, eating stones…). We could say that this complacency is a perfect strategy for the war itself (yes – we should understand “a war” as living in a meme ecosystem) to create an environment in which it can thrive. More panic – more entropy – more food for war. No entropy – no life – no war. Equilibrium is found (as always) at the maximum of the phase transition.

It is of course difficult to live with the necessity of war for any individual since it is an emergent property for all, i.e. something that “happens” independently of the will of the individual. This also means that war emerges in every system, so it cannot be understood from within the logic of that system. War not only proves the irrationality of any system but is also the best proof that a system is still alive.

There are many lessons to be learned from this. Let us point out just one: Brand life. Occasional wars (riots) are necessary and constituent parts of the inner life of a brand and its life in the markets. It is not about avoiding wars, but about how to manage them. The internal brand structure, brand management, is ultimately nothing other than the management of internal and external unrest. Management that does not try to avoid wars, but tries to create them “small” and often, knowing that less frequent wars lead to longer periods of complacency and wars of greater magnitude with less predictable (manageable) outcomes.

But how then could one reconcile the evidence presented by Steven Pinker in his massive work The Better Angels of Our Nature with my claim that wars are evolutionarily necessary? Simple. Many civilising processes have indeed reduced armed fighting between states, nations and even individuals over time, so one can easily assume a further reduction in this respect. But it is precisely because of this civilising process that the battlefields are shifting from the physical territory and biological weapons to memetic battlefields. To the extent that memetic reproduction takes on a more important role in our evolution compared to genetics, wars have evolved into civilised memetic battles with words, images and sounds.

The memetic battles are as fierce as the physical ones, although people die not from wounds in their flesh but from wounds in their souls. Life is indeed fundamental, so the murder of a person in good standing (with memes) should never be compared to physical murder. But anyone who has survived violent memetic attacks would agree with my assertion that those wounded by memes would often rather be dead than suffer further memetic massacres.

Despite being one of the greatest thinkers of our time, Steven Pinker did not consider memetic wars. Had he done so, the war statistics of the last few centuries would be far less optimistic. Memetic wars should be included in global conflict statistics, and a whole new taxonomy of types of wars and types of casualties should be developed. Wars on social media, wars on the dark internet, future blockchain wars, and verbal battles in local offline pubs that drive victims away from civilised social networks will still end up being categorised, assessed and prosecuted.