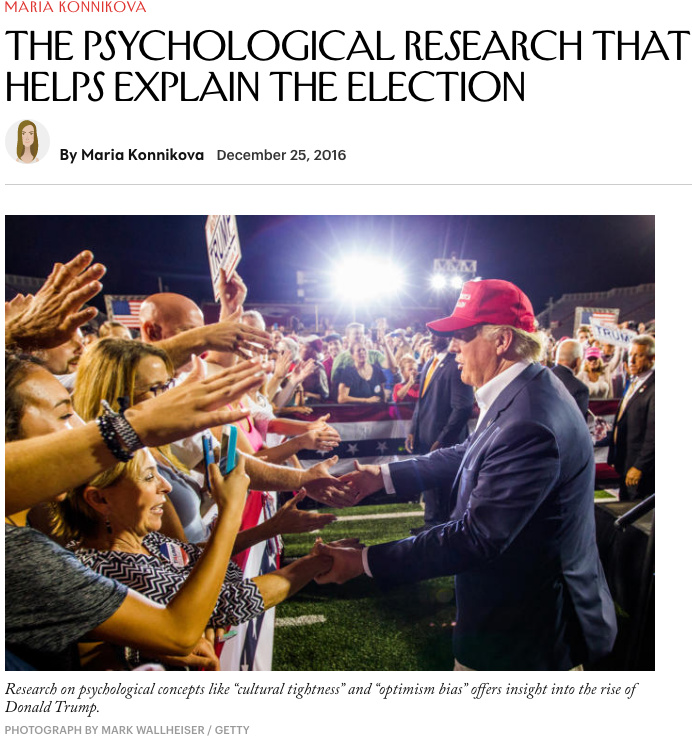 Donald Trump phenomena allow us exquisite pleasure while observing various types of intellectuals in their search for explanations. What amuses me is not so much if their statements make sense or not, but how they mask or unmask them. In general, one can find two types of reactions to a disaster of biblical proportions:

Type 1: Overt statement that Donald Trump is such a pathetic figure that a decent person cannot and should not only vote against but also any serious analysis of his words and actions belongs to “no-go-zone”. This type asserts the notion that already by analysing Donald Trump one commits a crime against reason and humanity. Type 1 analysts find Donald Trump as a mistake of apparently disoriented voters. This mistake comes from their irrationality and is as such something that a decent person cannot take seriously. Such a position is not only noticeable among many intellectuals, Hollywood actors and even among some business leaders but goes wider.

There is one restaurant in Hawaii that banned Trump voters from entering. Trump voters are seen as infected by “trump disease” that is so contagious that should be kept somewhere distant from the rest of the world. While it should be easy to fight against this type of analysts intellectually, history with Nacizm that performed the same ban on Jews and some other stakeholders groups shows, that if such metal slips become prevailing, individual freedoms perish considerably. The irony is that those banning Trumpers (Trump followers) as Nazis, in fact, behave like Nazis.

Type 2: This type is far more interesting. It can be observed in articles like this one in The New Yorker. The position of such authors is objective-like. They would sincerely like to understand “what happened”. It seems like they would like to explain something to us, readers. But are they really? What if they use press space to heal their cognitive dissonance? Unconsciously, of course.

The mentioned article proves to be an excellent example of Type 2. Why?

is that it rests on a couple of studies that are utterly biased for they attribute “confirmation bias” to those that “are strong partisans” only. All mentioned studies attempt to understand reality as if there were two distinct groups of people. First one consists of individuals that are strong partisans and behave like savages or even tribalists for the reason of confirmation bias. Then there is another group of individuals that are rational, civilised and does not suffer from confirmation bias disease. Such studies thus prove that we (rational beings) understand why they (irrational tribalists) are underdeveloped in comparison to us. Type 2 position, therefore, takes Type 1 as granted (Trump is an idiot not worth to utter a word about) and at the same time, explains why his voters support him. Since they have confirmation bias disease, their irrational selection is explicable but of course, not tolerated.

According to the western doctrine of medicine, after we understand the origins and mechanisms of a particular disease, we can start to eradicate it. This article does not come to such obvious solution, but I would not be surprised if Universities that form a large part of Type 1 would not open studies and propose treatments for those that are so seriously ill. Such treatment could be named: “Let us kick out confirmation bias out of poor tribal retards like we kick out cancer cells.”

is that an article like this silently avoids long known and confirmed facts about cognitive dissonance. We know that cognitive dissonance is a constituent element of all humans but autists perhaps. We all have this “disease” regardless of gender, race, age, political belief or even education level. Scientists that explore yet undiscovered domains are perhaps the best examples. Should they not have their a-priori vision that contradicts so far known reality, they would not have even thought about to break present prevailing theories. Scientific exploration is only the perfect example of positive effects of cognitive dissonance, but one can find it in each human action, in each meme governed action. That is why I say that author of the mentioned article in New Yorker has cognitive dissonance. (Though her dissonance is no lower after she wrote it). She will suffer on for sure. She will never understand herself as being in cognitive dissonance while supporting Hillary Clinton and now probably Joe Biden.

is very personal. I was appalled by finding Steven Pinker as one of the main protagonists of this article. He allegedly wrote:

As all philosophers know, one should be extremely careful in using the word “obvious”. Obvious for whom? Then to take free trade and open borders as an inseparable entity is also very questionable, as I explained already in this post. One could namely easily imagine liberal free trade among different cultures separated by borders that keep those cultures distinct. And then the argument that he should not be the right person because of his sympathies with Putin is at the possible bottom level of argumentation. Ad hominem argumentation. Pinker at his worst.

I was appalled for Steven Pinker is one of few contemporary scientists that has something to say these days. His books belong to those few that not only reshuffle last year snow as being a fresh powder. But this paragraph that exposes his undigested cognitive dissonance in full extend is not interesting for this reason only, but because it also gives a clue where Steven Pinker is short in all of his books.

No memes – no reason

For a reason unknown to me, he strictly avoids using memes as second replicators to genes to explain neuroscientific phenomena, neural diseases and language issues. He should have use meme concepts for he is top evolutionists in neuroscience. He is an evolutionary linguist. Should he understand the power of memes as replicators, he would easily understand alleged dissonance between Trump words and Trump actions. By the use of evolutionary memology, he could easily understand the connection of hardwired genetically encoded human cognition with self-replicating memes that serve as short term vehicles for individual adaptations and survival.

Donald Trump has no education about evolution and no clue about memes. But his actions prove that he enacts lessons of evolution much better than Pinker understands it and that he feels at home with memes while Pinker and New Yorker have no clue.

Donald Trump is no saint and no hero. He is certainly making mistakes like any other human being. But by blaming him for something he has not committed those that want to destroy him prevent others to see what he really does wrong.