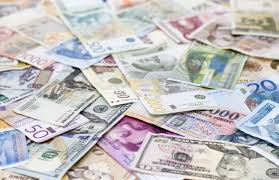 According to established theory of money, based on works of Eugen Böhm von Bawerk and especially Ludwig von Mises, money does not represent a capital. According to this view money does not produce added value like do all other means of production, but serves only as a medium of exchange of goods that appear on market.

That such conception of money holds true is especially apparent after various sorts of commodity money were replaced by fiat money and various higher order derivatives. But only if marginal utility theory of how added value is constructed holds true.

Apart from many other insights into economy that was developed through marginal utility theory there are two that are important in this respect. First one is dependance of value of certain good on place, and another one of time. Water in Sahara has much higher value than that same water by the lake in Swiss Alps. And any good has lower value if it can be consumed sometimes in the future than if it can be consumed now.

All goods are thus time-space dependant. It is extremely interesting that Mises wrote his Theory of Money and Credit in 1912, in the period between Albert Einstein wrote first theory of special relativity (1905) followed by theory of general relativity (1915). Einstein theories distorted objects in time-space of Universe, Mises theory distorted values of goods in time-space of economy. Value of certain good, let it be production, consumption, transport or any other good is not inherent property of such good, but is always instant/partial subjective evaluation influenced by specific time-space situation of such good.

It would be thus not misleading nor pretentious to say that Mises is Einstein of economy.

What Mises did not take in account explicitly about the different role that plays money among all other goods is, that money in its purest fiat form with the highest emanation through crypto currency, gets affected only by time and not by space. Since money nowadays travels through space with the speed of light, it is space indifferent. On the other hand certain amount of money disposable in this moment still holds higher value that same amount of money somewhere in the future. For that reason interests do not represent form of added value but only show a discount based of individual evaluation of distortion of nominal value in time.

Money is thus not only different from all other goods for its only purpose is medium of exchange, but for the reason of being affected by the influence of time only in time-space paradigm of our Universe.

Why this last special character of money is important is going to be revealed in next post.