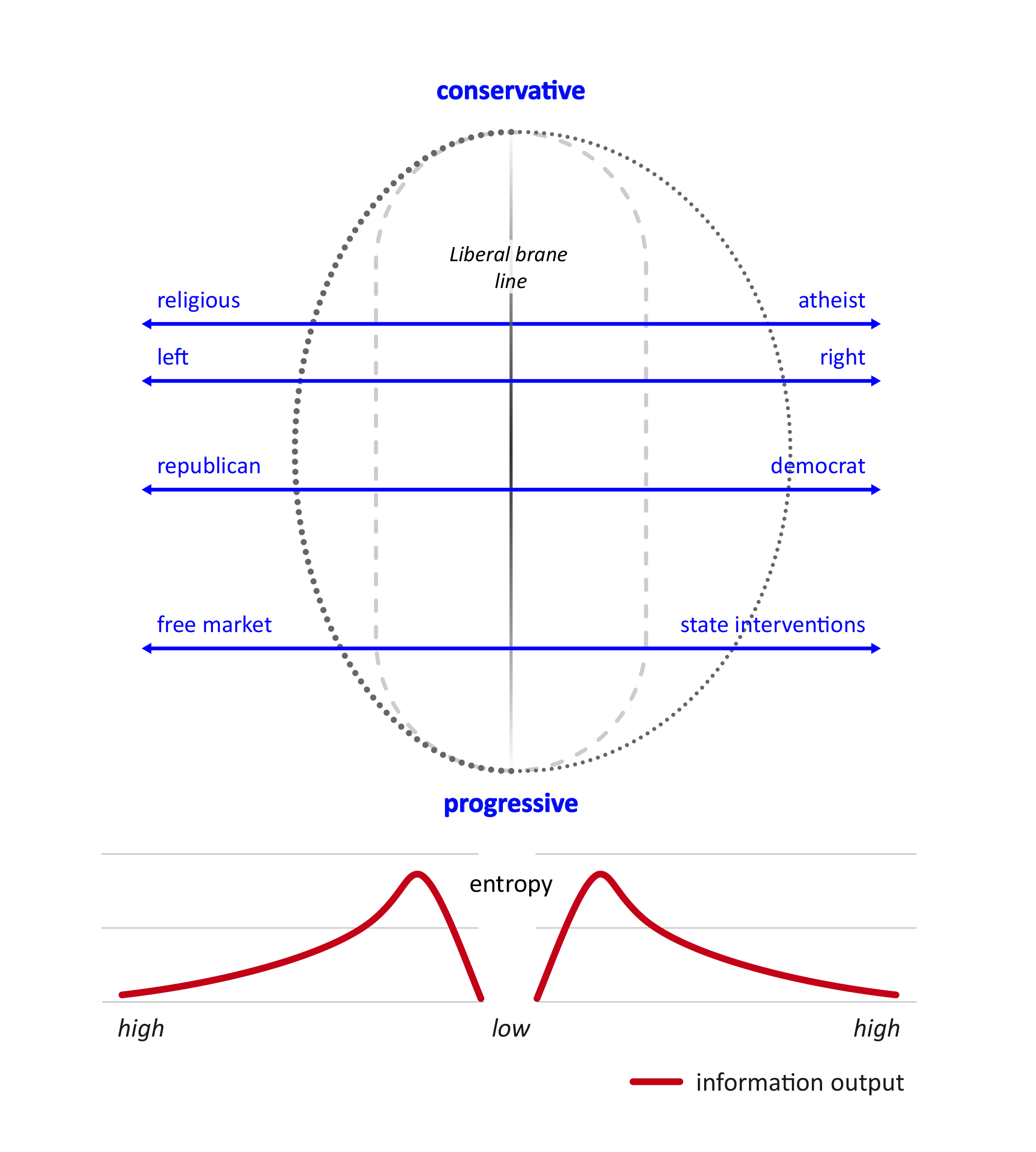 There is time for a more up to date model than the existing conservative/liberal, republican/democrat, left/right linear stratification of political standpoints.

There are a couple of reasons to do this:

Political brane topology follows quite a simple notion that has spread recently due to insights from quantum mechanics, evolutionary biology, neuroscience and many others that transgress one dimensional, linear mental model replacing it with multidimensional and dynamic. All such models are relational, meaning they do not have a fixed background that supports what we see forever. Still, that background is constantly being redefined, meaning that what we observe is background and foreground simultaneously.

I would not dare to say that the model below has the ambition to be the sole possible model – as we cannot dare to say that our world is the only possible world. It gives us an option to re-think the reality we are living in from another angle that provides new colours, new shades and new possibilities to align.

There are only two permanent (o)positions in political brane topology (PBT): conservative and progressive. They are not positions that one could take place in, but possibilities (in the sense of how Stuart Kaufmann defines possibilities in his latest book, Humanity in a Creative Universe). One can be farther or closer to each pole (north, south) but never on the pole itself. One can never be progressive only neither conservative only.

But let us first define what conservatives and progressives stand for and why are they in opposition. Conservatism is an ideology that understands reality and changes in time as circular or spiral. Conservatism denies the goal (utopia) as a point outside of our existing reality (heaven or society that does not yet exist but is achievable only if individuals follow specific rules). Conversely, progressivism, as ideology, accepts gradual or revolutionary progression of something in time in the direction of a target, that is outside, that serves as a background/foreground of our reality.

With a high degree of simplification, we could say that Buddhism, Freemasonry, and other historic eastern belief systems are more conservative. In contrast, western belief systems based on scientific, mechanistic ideology are more progressive. Even more interesting is that circular economy, if not conceived as a utopic top-down project of EU technocrats, should serve as an example of conservatism. In short: conservatism understands the reality from the bottom up. In this sense, evolution is conservative. As it was proved from Darwin, understanding evolution as development that follows a path up towards some final goal is a cardinal mistake.

From these sentences (and the rest of this post), it is pretty clear that I strongly take a conservative stance.

The brane itself should be understood as a string that occupies various curvatures between the north and south pole. The brane is fastened to conservative and progressive poles and vibrates around in all dimensions all the time. When the string is in a narrow “line” between north and south, this is a liberal position. Why?

The liberal position has the lowest possible entropy. It would be wrong to understand a central line like a still line. It moves and has the highest possible speed/temperature in the central position. Liberal position (straight line) is though hypothetical only. Brane (life) is never at rest. Brane cannot but vibrate. It is easier to picture the brane as soon as we leave two-dimensional space. Brane is (at least) three dimensional. It vibrates in all directions. (In fact, it has to be multidimensional, but that would overcomplicate the story for this purpose).

That means that the above two-dimensional visual presentation of Political Brane topology is misleading. The left can be on the right, left, back, half right, or wherever concerning the vertical liberal line. Our life is not two dimensional, at least. And this is already implicit proof that there are no left and right as once forever defined positions. It depends on the observer’s angle to see one side as right and another as left. If you imagine a person that would observe the brane from the opposite side, he will take your left as his right. But then observers take all possible positions around the brane, in reality, so apart from poles nothing else is fixed in such a brane.

Traditional left/right stratification is obsolete not only in quantum physics and cosmology but also in political sciences.

Horizontal arrows on the picture represent some possible tensions that are constantly pushing a brane from the lowest entropy position to various extremes on all sides of the brane. One can take these tensions as Erwin Schrödinger’s manifestations of life in his book What is life.

Isn’t it a kind of paradox that extreme left and right positions are positions with the highest and not lowest entropy?

Extreme positions are frozen, crystallized positions. Extremists are extremists strictly for their stubbornness and homogeneity. For that reason, they have the lowest possible internal energy (internally frozen) but the highest potential energy concerning other extremists.

On the other hand, the liberal position has no external frictions but the highest internal energy. Liberal means being equally open all around for reactions. It has the lowest possible entropy with the highest evolutionary potential. In extreme liberal cases, this potentiality is limited to chaos. All options are equally actualized. In such an extremely liberal position, the system produces mutations only, so the system is in chaos. There is information overflow.

On the other hand, positions away from central, liberal produce almost no mutations, thus representing a rigid system with the lowest information output. There are, of course, many horizontal tensions that keep the brane alive (vibrating) and not only four placed on the picture above. But what is even more significant is that most of the system finds itself around the peak of the power line, the red line.

When we say that the entropy of each horizontal tension increases in both directions from the vertical line, we also say that the sustainability factor (information level) follows the phase transition power line (red line). That means that information output raises towards the central liberal line. The line follows a power-law line, meaning that the highest information level is reached right at the edge of chaos (insanity), in this case, the central liberal line. Just before the red line drops down fast towards the central liberal (chaos) line, there is a peak, a moment of highest fertility, highest information output and the moment of optimal (sustainable) mutation level of the system. Left and right, there are not enough mutations; on the central brane line, there are too many mutations for a system to sustain.

We should understand the brane as an explanation of human microcosmos or even an explanation of human particles and an explanation of higher entities as political parties and possibly even larger entities. This also means that each brane is a world that is unique and separated from all others. There is, in fact, no communication possible among them. There are parallel worlds within each individual, as explained in neuroscience and, for instance, in multiple draft scenarios of how the mind works from Daniel Dennett.

Political brane topology thus allows us to avoid apparent pitfalls coming from static, two-dimensional, fixed background-based left-right political orientation. With a bit of the help of the most detailed insights from evolutionary theory complexity studies, but with even more critical unprejudicial observation of the world around us, parties should not be in opposition to align themselves and cooperate easier.

Upgrade and further interpretation of Political Brane Topology can be found in Liberal and Conservative again.