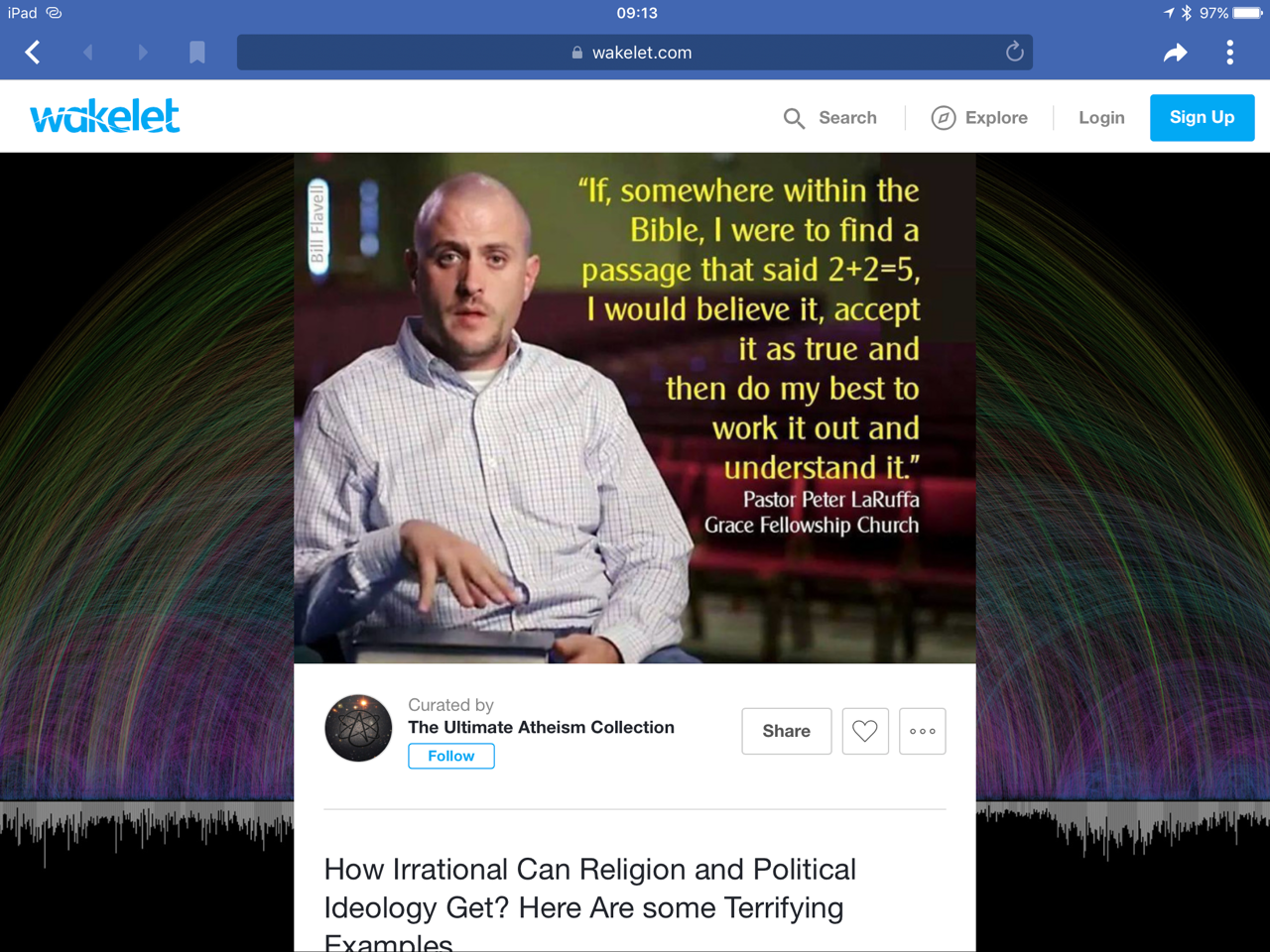 When it comes to the question of truth, it is by default most fruitful to use a statement of some creationist and then follow reactions of atheists.

A post on a blog Ultimate Atheism Collection is a good example. The statement of Pastor Peter LaRuffa from Grace Fellowship Church goes:

If, someone within the Bible, I were to find a passage that said 2+2=5, I would believe it, accept it as true and then do my best to work it out and understand it.

I will not quote reactions since they seem quite obvious.

While I certainly do not claim that 2+2=5, I will try to explain why the black and white world of radical atheists has some serious problems.

What I mean by radical atheism or radical rationalism is the following reasoning: science says that 2+2=4. And since every sane person knows that 2+2=4 then it follows that if science says that such and such global warming theory is approved by science, that it should have equal validity as 2+2=4. But such a conclusion is false.

A conclusion about the absolute validity of everything and anything that science says has become an axiom in western society. Anyone that questions this or that “scientific truth” gets religious, creationist, subjectivist, voodoo, witchcraft or at least “wacky” label.

There are many instances on this blog where I have addressed objectivity fallacy from various angles. This one is new. It comes from the fact that truth is not subjective in the sense that it would lie in our heads irrespective of outside reality. If subjectivism was right, pastor Peter LaRuffa could even be right. It is exactly this objective reality that helps us in resolving the “grey world” in which truth is objective but at the same time, not one only and even not scientific only.

The pressure of reality

The rationale is quite simple:

I would leave Pastor to believe that 2+2=5. I would then say to him that I agree and that following his truth I will give him 2 times 2 million Euros and he will give me back 5 million Euros since 2+2 equals 5.

My point is that one does need neither State nor Science nor God to get feedback from reality, to have a reality check. One might believe that objects do not exist in reality, but after a couple of painful bumps, he will take into account reality believe it or not. He will take 2+2=4 concerning my interests. He will take physical reality concerning objects. A God might tell him that 2+2=5, but he will accept reality after he experiences 1 million loss. Believe me. God, State, Ministry of truth (Orwell) might prophet many “truths”, but they cannot prevent a normal person from checking such truths in reality. Truman show happens, but sooner or later, the main actor touches the edge of the bubble the director of the show induced him to believe in. The truth lies in relation to that edge.

But that does not mean that truth is one and objective.

This simple fact poses tremendous problems to all sincere scientists and also to prophets of global warming and all other ideologies pushed by any imaginable collective “ministry of truth”. Even if it is not collective Orwellian ministry of truth, one can easily find examples that denounce objectivity of science. It was Albert Einstein that renounced the possibility of entanglement as a “spooky action on a distance”. At the same time, we now know that entanglement is something that can be proved regardless of being counter-intuitive.

To conclude: Richard Dawkins fight against religion with the use of examples like the one I have used for this occasion is not only pathetic but also anti-scientific. People are checking reality (truth) all the time all over their lifespan. Because there is no absolute truth that one could get and understand. Truth happens in each instance in relation to another human, to another object. As the oldest wisdom on earth says: one person alone cannot pronounce truth, but the truth (the word) can only be pronounced in sequence by two persons. Truth happens in relation only. It is memetic.

Truth is though objective in the moment of relation only but is not objective as absolute, as a kind of revelation from a God or a Ministry of truth. It is not what science says about global warming, but what zillions of global interrelations have to say about. (I did not say that the truth comes from the average of opinions! Individual opinion has nothing to do with relation!) Interrelation is not subjectivism since it relies on hard reality checks.

Truth emerges from relations. It happens in the same manner as a measurement of quantum particles. They do not exist (for us) until measured. Only when measured they emerge for our perception. They exist outside our measurement/perception but have no meaning for us. As much as the truth might exist as some objective reality, but has as such no meaning for us. It emerges as meaning only in an interaction—either interaction of human with an object ar human with another human in communication.

It is not absolute, as Richard Dawkins would like to impose, but all the time changing as complex systems in universe change. All those that cannot adapt to such changes, perish. Albert Einstein perished regardless of his magnificent work at the beginning of 20Th Century, and Richard Dawkins perishes after the year 2000 when he abandoned his magnificent theories from the previous century.

I really hope that the truth about the relational objective substance of truth is now settled one forever. (Joke, of course!).